Key takeaways from a closer look at the relationship between the two biggest conversation sources.

As we explored data for the Social Listening Benchmarks for Higher Education: January 2021 report, we found additional research questions we wanted to pursue (big surprise, we know). One aspect we wanted to dig into is the correlation between social media and news. These are the two largest conversation sources, but how do they relate to and influence each other?

First, let’s refresh our memory. In the report, we categorized and defined six conversation sources, including the two we’re most interested in for this post.

And on average, here’s what our analysis found.

Knowing the full range helps you understand where your campus’s conversation falls for these two content sources.

Your online conversation is normal if it aligns with these ranges of earned social media and news (as a proportion of your total earned conversation).

Earned social media conversations typically represent a significant volume of mentions, so it’s critical to monitor and treat them with the same care as news mentions. To do this:

To increase the volume of news mentions and potentially engage a different audience:

If a significant event (positive or negative), involves your campus, assume what’s reported in the news will appear on social media or vice versa and prepare statements to ensure consistency and transparency across content channels.

You may not have control over the news messaging, but you do with social media—it offers a forum for your own narrative about the event. If it’s positive, take the opportunity to amplify the news and tailor it for your audiences. If it’s negative, decide if and how to address it, such as with a statement from leadership or a resolution plan. 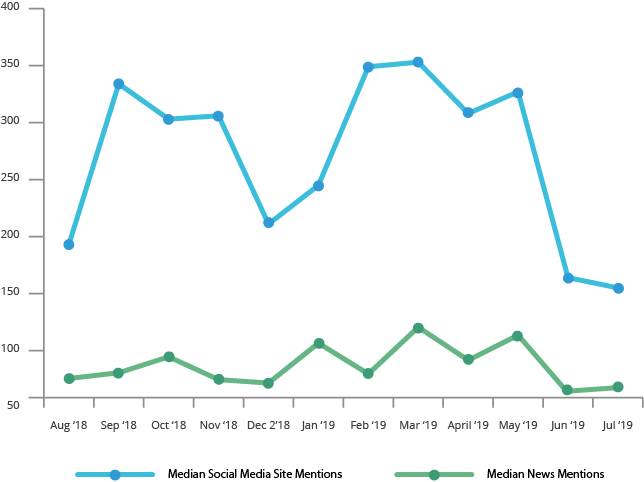 Line graph depicting the median value each month for earned news and social media mentions in our sample.

Another key finding is that similar topics of conversation (i.e., politics, current events, athletics, and academics) emerged on earned mentions from social media and news sites.

Topics in earned news mentions mirrored those from social media and focused heavily on current events, especially on Donald Trump and other politicians, Larry Nassar, and other topics such as athletics and academics. Academics tended to take a backseat to more public events that likely drew on strong emotions, such as current events involving campuses and athletics.

With evidence that earned social media topics mirror news topics (and vice versa), keep an eye out for ways to promote campus events that exemplify and amplify your positive messaging and brand attributes. Consider repurposing or realigning athletics content in support of brand messaging. On the flip side, prepare to weather and respond to more negative topics, such as current events or political issues, that surface in your news and social media. A negative news story may spark negative social media conversation, and negative social media conversation can be an early warning of a campus crisis. Regardless of the structure of your communications team, it’s important to keep lines of communication open between social media and media relations teammates.

Analyzing your campus’s online conversation sentiment over time helps you better understand what messages and topics resonate with your audience. We discovered two key patterns.

For earned social media mentions, the medians were 30% for positive sentiment, 3% for negative mentions, and 65% for neutral mentions. If your sentiment falls around these percentages, you’re in alignment with the benchmarks.

You can expect that most earned social media content will be neutral. When it deviates, it will likely be more (sometimes significantly more) positive than negative content. The following months had a higher proportion of positive social media mentions.

The breakdown of sentiment on news sources looks very different from social media mentions. The medians were 9% for positive mentions (21% lower than social media site mentions) and 78% for negative mentions. If your sentiment falls around these percentages, you’re in alignment with the benchmarks.

Unlike social networking site mentions, there don’t appear to be any obvious spikes in the proportion of positive or negative news mentions during the observed period. You can expect that while news stories about your campus may be more objective, you’ll be able to gauge how your audiences feel about those stories on social media.

Overall, social media represented an important aspect of earned conversation as it generated more mentions for campuses than news, although spikes in conversation volume for both sometimes coincided. This suggests a relationship between topics across sources that’s supported by how central athletics, academics, current events, and politics are to both sources.

Given the prevalence of earned conversations occurring on social media and their tendency to skew more positive than news mentions, carefully curate social media messages and share opportunities to continue positive conversation and increase engagement. Mentions of athletics and announcements of offers and commitments increased the proportion of positive social media mentions in March and summer months, so consider how to leverage those opportunities. Finally, look for opportunities to engage with media outlets, especially local outlets, to tell the positive and inspiring stories of your campus, your students, and your faculty.

Consider These Questions for Your Campus