Fellow students are the press who matter to your prospects and admits.

In October 2020, The New York Times released an article about the strange, COVID-influenced freshman experience on campus. The article quoted students from eight different campuses and, if I had to guess, I’d say marketing and PR pros on those campuses probably didn’t love the press since none of the student reports were overly positive.

If you’re like most campus administrators, you either get very excited or incredibly nervous when regional or national press references your campus or students. The concern, of course, is the reach of the message.

But here’s a question for you: are you similarly concerned about what students say online every single day?

Do a quick search on YouTube for “day in the life college student covid” and you'll immediately find YouTube videos from students at Vanderbilt, Boston College, Harvard, Michigan, Baylor, North Dakota, American, BYU, and others.

Chances are, you probably have a student sharing similar content. 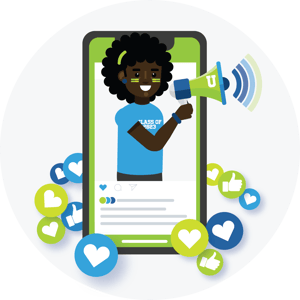 And while these videos may not generate the same number of impressions as an article in The New York Times, they're most certainly reaching more of your prospective and admitted students.

For example, Shan Rizwan, from Boston College, published a video called “College life during COVID” in September. It has more than 50,000 views.

Elliot Choy, from Vanderbilt, published a video in August called “First day of college ft. covid.” It has more than 330,000 views.

Many of the most-watched videos show students on campus, trying to make the best of a tough situation. But other videos, from students who stayed home this fall, are less kind.

Owen Marvin, at Bowdoin College, shared his COVID video in early October. The video, titled, “online school is NOT FUN (study-from-home vlog)” has a little over 300 views. Owen’s video isn’t critical of Bowdoin, but as the title suggests, it's a pretty depressing look at his student experience.

You may see Owen’s view count and shrug off his video, but that’s a mistake. Owen is what’s called a micro-influencer. He just passed 1,000 subscriptions on YouTube and his videos don't receive nearly the views of those mentioned above. But Owen is the primary vlogger at Bowdoin, which receives 9,000+ apps and has approximately a 10% acceptance rate. So if prospective and admitted students want to understand the Bowdoin experience, Owen is who they’re finding. His perspective is one you need to care about.

It's easy to be concerned when your campus receives national press. Especially now, when the news is so infrequently positive. But while these articles may come out sporadically, don't forget that your current students share their experiences every. single. day.

And they’re the press that matters to your prospects and admits.